Home Lessons and Activities Bible A Parable of Forgiveness 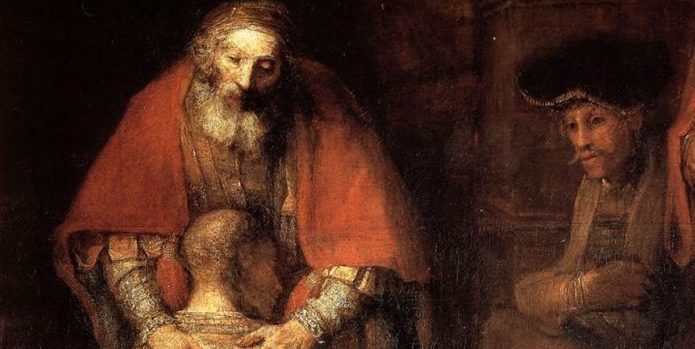 Soon we will come face-to-face with Lent, a season marked by prayer, penance, and the call to return to God. As a Lenten warm-up, let’s look at a wonderful lesson of forgiveness, as we examine with our students the Parable of the Prodigal Son.

“‘Father, I have sinned against heaven and against you; I no longer deserve to be called your son.’ But his father ordered his servants … ‘Take the fattened calf and slaughter it. Then let us celebrate with a feast, because this son of mine was dead, and has come to life again; he was lost, and has been found’” (Luke 15:21-24).

✱ What did the younger brother do with his inheritance?

✱ Why did the father in the story rejoice?

✱ In the parable, the older brother becomes angry when the father celebrates the younger brother’s homecoming. Why?

✱ Did the younger brother deserve to be forgiven and welcomed home?

✱ How have we been like each of the brothers in our lives?

✱ How is the father in the story like God the Father?

1. Coin collection relay. Set teams up along a starting line for a relay race. On the other side of the race for each team, put a pile of coins representing those that the younger brother of the parable squandered. The first player from each team runs up, picks up one coin, runs back with it, puts it in a cup, and tags the next runner. The next runner runs to pick up the next coin. Continue in relay-race fashion until one whole team has collected all of their coins.

2. Art appreciation. Print out a picture of Rembrandt’s Return of the Prodigal Son. Examine the powerful painting with the class and discuss the various characters from the parable that are in the picture. Print out and laminate small versions of the image for them to take home, ideally with the Act of Contrition or another appropriate prayer printed on the back.

3. A-MAZE-ing race. Set up a maze or obstacle course for the kids to run through, either in the
classroom or, ideally, outdoors. The maze, wide enough for multiple children (one from each team at a time) and with obstacles placed along the way, should lead away from the starting area, wind around, and circle back to the beginning, where the runners who complete the race each put on a robe, ring, and/or party hat and sit down. Teams send one runner at a time, and the first team to get everyone home and ready to celebrate wins!

It’s a challenge for us to acknowledge our sinful behavior and cry out for God’s forgiveness — but learning this lesson will transform our lives. In spending time with the story of the prodigal son, we can show our students that, though we sometimes wander away, we have a Father in heaven who ever awaits our return with open arms.

Lynn Wehner is a Catholic writer, editor, and speaker who lives with her husband and their children in Connecticut.

This article was originally published in Catechist magazine, February 2017.