On Aug. 1, 2018, the Congregation for the Doctrine of the Faith (CDF) detailed Pope Francis’ approved revision to the Catechism of the Catholic Church with regard to paragraph 2267 on the use of death penalty. This revision declares that the death penalty is “inadmissible” as a form of punishment as “the dignity of the person is not lost even after the commission of very serious crimes.”

The revision is one of merciful hope, leaving room for a convict’s future repentance. It also takes into account our contemporary society whereby the lethal means of capital punishment is no longer needed to protect our communities, given modern penal reforms. 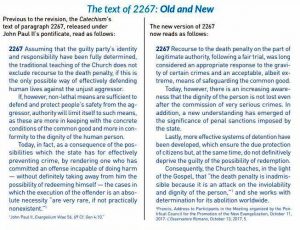 Find the text of the revision on the Vatican website at CATmag.us/2Mz9Aa0

The CDF described this revision as building on the prior magisterial teaching of St. John Paul II and Benedict XVI. (See the letter to bishops from the CDF at CATmag.us/2nlPJAk.)

St. John Paul II’s call for a stronger culture of life has been a mainstay of the new evangelization. He vigorously called for an end to capital punishment, not only in his encyclical Evangelium Vitae (The Gospel of Life), but on other occasions, including his visit to St. Louis, in 1999, where he preached how Christians ought to be unequivocally pro-life:

The new evangelization must also bring out the truth that “the Gospel of God’s love for man, the Gospel of the dignity of the person and the Gospel of life are a single and indivisible Gospel” (Evangelium Vitae, 2). … The new evangelization calls for followers of Christ who are unconditionally pro-life: who will proclaim, celebrate and serve the Gospel of life in every situation. A sign of hope is the increasing recognition that the dignity of human life must never be taken away, even in the case of someone who has done great evil. Modern society has the means of protecting itself, without definitively denying criminals the chance to reform (cf. Evangelium Vitae, 27).

(Emphasis mine. Read more at CATmag.us/2M30uWR.)

Benedict XVI recalled “the attention of society’s leaders to the need to make every effort to eliminate the death penalty.” He later wished a group of the faithful that “your deliberations will encourage the political and legislative initiatives being promoted in
a growing number of countries to eliminate the death penalty and to continue the substantive progress made in conforming penal law both to the human dignity of prisoners and the effective maintenance of public order.”

Readying for the Jubilee Year of Mercy, Pope Francis gave voice to this sentiment on March
20, 2015:

Today the death penalty is inadmissible, no matter how serious the crime committed. It is an offense against the inviolability of life and the dignity of the human person, one which contradicts God’s plan for man and society and his merciful justice, and impedes the penalty from fulfilling any just objective. It does not render justice to the victims, but rather fosters vengeance.

The U.S. bishops have repeatedly called for an end to the death penalty — and applauded the legislative actions that have both repealed the death penalty in some U.S. states, or actions that pardoned death row inmates from that fate. (A recent history of their statements are at CATmag.us/2Omp3uN.) From USCCB.org:

Our faith tradition offers a unique perspective on crime and punishment, one grounded in mercy and healing, not punishment for its own sake. No matter how heinous the crime, if society can protect itself without ending a human life, it should do so. Today, we have this
capability.

We are all sinners, but through the Father’s loving mercy and Jesus’ redeeming sacrifice upon the Cross, we have been offered the gift of life everlasting. … The use of the death penalty cuts short any prospect for transforming the condemned person’s soul in this life. Catholic opposition to the death penalty, then, is rooted in mercy. (Source: CATmag.us/2My9XSf.)

Pat Gohn, MA, is editor of Catechist magazine and Catechist.com.

This article was originally published in Catechist magazine, October 2018 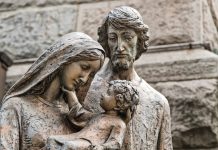