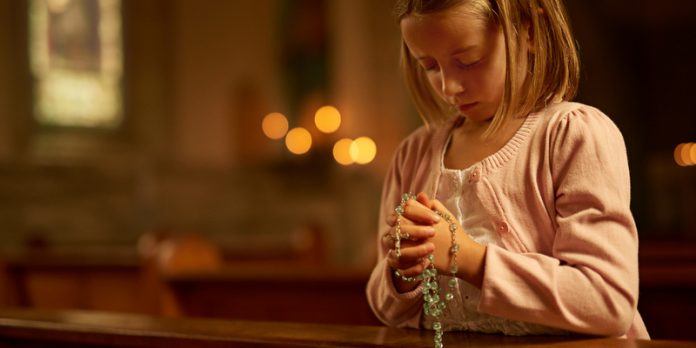 I’m continually looking for new ideas and inspiration for activities with my seventh-graders. With October being the month of the Rosary, the religious education classes always dedicate some class time to praying the Rosary, so my class was pretty familiar with the prayers and the order in which they are prayed. For this year, I thought we would focus on the Mysteries of the Rosary and learn how to meditate on those particular times in Jesus’ and Mary’s lives. Using visual symbols became a great tool for me to teach my class something more—on their age level.

Students made their symbols out of construction paper and displayed them on poster boards. Individual student “experts” then used posters and handouts to teach the rest of the class about the Mystery, the Bible verse(s), and the meaning of the symbol. Then the posters were displayed in our classroom.

The students seemed to enjoy this activity. It helped them locate stories in the Bible. By choosing their own symbols, students better understood the Mysteries. Because students were actively involved in the lesson, they now have a unique understanding of the Mysteries of the Rosary.

These were the symbols my seventh-graders came up with:

The Annunciation: an angel

The Visitation: a handshake

The Birth of our Lord: a manger

The Presentation of Jesus: two doves

The Finding of Jesus in the Temple: a temple

The Agony in the Garden: praying hands

The Scourging at the Pillar: a whip

The Crowning with Thorns: a crown of thorns

The Carrying of the Cross: a cross

The Crucifixion and Death of our Lord: a crucifix

The Baptism of Jesus in the Jordan: a shell with water drops

The Proclamation of the Kingdom of God: a banner saying “welcome”

The Transfiguration: a cloud with “this is my Son” written on it

The Institution of the Eucharist: a host and chalice

The Resurrection: a butterfly

The Ascension: a cross in the clouds

The Descent of the Holy Spirit: a dove

The Assumption of Mary into heaven: a crown in a cloud

The Crowning of Mary, Queen of Heaven and Earth: a crown

This article was written by the Catechist Staff and appeared in Catechist magazine, March 2012.