Home Lessons and Activities The Cross

One of the oldest symbols of our Christian faith is the cross, a sign recognized virtually all over the world. Lent is an ideal time to take a look at this ancient yet ever-new icon.

History of the cross

Because crucifixion was such a gruesome way to die, the earliest believers did not use the symbol of the cross. It wasn’t until the early fourth century that the cross was adopted as a Christian symbol. The sixth century saw the appearance of the first crucifixes, that is, crosses with the three-dimensional image of Jesus on them.

What the cross symbolizes

The main reason Christians venerate the cross is because it symbolizes Jesus’ great love and sacrifice for us. When we look at a crucifix, we think how much he suffered for us. And more importantly, how much he loved us!

Although the cross looked like the end for Jesus, it wasn’t. That’s why we must teach children that the cross is also a symbol of hope. We believe he rose again after three days, thus transforming apparent defeat into glorious victory. The cross is also the sign that God forgives us of our sins no matter how serious they may be. The writer John Scott notes, “The gospel is the good news of mercy to the undeserving. The symbol of the religion of Jesus is the cross, not the scales.”

We also make another form of the sign of the cross that dates back to the ninth century. Using our right hand, we trace a large cross from our forehead to our chest and then our left shoulder to our right shoulder. As we do this we say the words, “In the name of the Father, and of the Son, and of the Holy Spirit. Amen.” In doing so, we give honor to the Blessed Trinity as well as the cross.

In addition, we use the sign of the cross in our worship. As we enter the church, we dip our hand into holy water, making the sign of the cross in remembrance of our baptism. Both priest and congregation begin each Mass with the sign of the cross. During Mass, before he reads the gospel, the priest traces a small cross on the Book of the Gospels. He repeats the gesture on his forehead, lips, and chest. We do the same as we silently say the words, “May Christ be on my mind, on my lips, and in my heart.” At the end of Mass, the priest blesses the congregation while tracing a large cross in the air with his right hand.

As the main symbol of our Christian faith, the cross commemorates the profound mystery upon which our faith rests: in the person of Jesus, God became a human being and suffered and died for us. But we must do more than decorate our churches with the cross, wear it around our necks, or use it as a gesture in prayer. We must live the cross. Jesus said to his disciples, “Whoever wishes to come after me must deny himself, take up his cross, and follow me” (Mt. 16:24). This means first of all that we are called to share in the sufferings of Jesus. Sometimes these sufferings can be great. But more often they are simply the small pains, inconveniences, misunderstandings, anxieties, and trials of everyday life. In addition, we must share in the love of Jesus. This loving can be dramatic, but most of the time it consists in performing our daily duties faithfully, generously, creatively, and with joy.

Six reasons why we make the Sign of the Cross

This article was originally published in RTJ’s creative catechist February/March 2013. 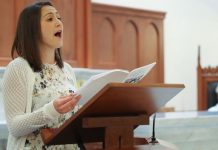