Home Lessons and Activities Arts and Crafts Lend a Hand, Lift a Heart! 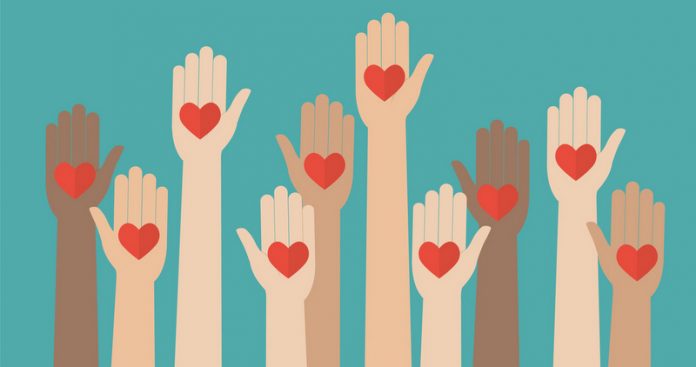 ‘Lend a Hand, Lift a Heart!’ was the theme for the religious education program at St. Roch Parish in Flat Rock, MI. And it’s also the title of an art project designed to make the theme come alive for the 400 students, K-8, enrolled in the program.

DRE Maryann Dobbs and second-grade catechist Christine Hensley developed the idea for the project and then worked with students to create three brightly colored 5’ x 8’ banners that hang in the St. Roch Education Center.

“Lend a Hand, Lift a Heart” began with “hands.” Students traced their hands on colored sheets of foam with adhesive backing. Then they cut out their foam hands and used markers to print their names on the hands.

Maryann and Christine arranged the hands by grade levels on the three banners so that each child could easily find his or her hand and so that children could show their parents which hand was theirs. It was even okay for children to place their real hands on their banner hands.

The “hearts” came next. Students drew hearts on the foam, cut them out, and labeled them with their names. But the hearts were not automatically placed on the banners. Children learned they needed to earn the right to place their hearts on the banners with good deeds. Parents and caregivers were encouraged to write notes to catechists describing their children’s good deeds.

The hearts children earned were placed above their hands to make it easy for children to discover that they had received a heart as a reward for a good deed.

In the first year of the project, Maryann and Christine were pleased by the children’s sincere efforts to lend their hands to show kindness and, of course, to earn their hearts. And they were also pleased when, in the next year, the children asked to make new hands because they had grown and their hands were bigger. The “old” hands were replaced by “new” hands, and the children continued to do good deeds so that they could earn hearts on the banner.

“Lend a Hand, Lift a Heart” proved to be an ideal fit for St. Roch’s religious education theme, but it could also be a good way for you to encourage children in your program to lend their hands to help others during Lent.

This article was originally published as the Idea of the Month award winner in February 2014.