Family-centered catechetics programs — a model that has existed for some time — seems to be trending from a tiny niche to increasingly mainstream. More parishes are employing it, and more family-centered curricula are being published. Maybe it’s the wave of the future.

The uptick in interest could be attributed to two causes. First, there is a growing dissatisfaction among both religious educators and parents with the status quo of once-a-week classes. Given today’s culture with a myriad of sports, music lessons, and other activities children are typically involved in, religious education becomes yet one more errand on a list for frazzled parents to check off each week; one hour (plus travel time) less for families to be together at home. And for their part, catechists are dismayed to notice that some parents drop children off at class each week but don’t always make the effort to attend Sunday Mass with them. They wonder what benefit will come from teaching children a faith that their parents don’t seem to practice!

Second, dioceses across the nation are beginning to recognize the need for lifelong faith formation. Bishops are asking parishes to initiate efforts to evangelize adults who were not adequately catechized as children or who never moved beyond a grade-school understanding of the Catholic faith.

The hope is that such efforts will make more adults into “intentional disciples” who commit to following Jesus with all their hearts.

Family-centered catechetics seems to address both of these problems.

Family-based models in the parish community

Typically, this model requires one monthly session for parents to attend (while the kids go to separate rooms for an activity with catechists). At this meeting, parents are the “students” who receive teaching from catechists (or pastors) about some aspect of the faith. They are also equipped with materials and methods for presenting that same teaching to their own children during the rest of the month. Some programs also offer a second monthly, whole-family activity that might combine devotional, learning, and social time to build a greater sense of community in the parish.

[Note: the family-centered programs described here are for grades K-6. Generally, there are additional components for first Penance and Reconciliation, first Holy Communion, and Confirmation, but these are not within the scope of this article.]

The family-centered model claims several benefits. It eliminates three “drop off” sessions each month, relieving stress on parental chauffeurs and giving families a little more time at home. It recognizes the parental role as primary educators of their children. And by having parents learn what and how to teach their children, the holes in their own formation will hopefully be filled in. That, at least, is the theory. How has it worked out in fact? To find out, we spoke to three people who have hands-on experience with family-centered catechetical programs in their own parishes.

At Ascension Church in Overland Park, Kansas, more than 700 children are involved in religious education, and parents can choose from three different models: traditional weekly classes, an intensive summer school program, and the family-centered approach as described above. The third model — involving approximately 200 children — uses the “Family Formation” program. This program was created by a Minnesota parish back in the 1980s and is now used in 180 parishes nationwide. Ascension’s DRE, William O ‘Leary, says that Family Formation has been in place at Ascension for the last five years. He notes, “We know from studies that parental involvement is the number one factor in whether the faith is successfully passed on to children. So how do we get parents to see that their role matters? Our family-centered program gives them a concrete way to live that out. The parents who participate are very receptive — the catechesis we give them is meeting a need for adult formation. They are happy to be growing in their faith and able to talk to their kids about it. It’s no longer awkward or out of the ordinary to bring up religious topics. Instead, it’s more like, “Hey, remember when we talked about this last week?”

On the other hand, O’Leary emphasizes that a program is only good to the degree that it is actually implemented: “If parents sign up but don’t take time to follow through, it’s not going to bear the fruit that it should. Of the families who use it here, I’d say about 50 percent are very faithful in doing their part, another 15 percent do it most of the time, and the rest are struggling to get it done — missing some of the monthly parent meetings and not picking up the month’s lesson packets until a week before the next session, which means they have to cram it in. That’s better than nothing, but far from the ideal.” But all in all, the results have impressed O’Leary to the point that he has also created a family component to his traditional weekly religious education classes.

A lifelong process starting with the domestic church

Maureen Simmons is the pastoral coordinator for lifelong faith formation at a two-church collaborative in a Boston suburb. That long title means that she oversees “helping all people at any age with whatever they need to grow in the faith since formation is a lifelong process.” Simmons sees family-centered catechetics as a key component, since “it aims at the domestic church, which is the family. Adults have to know the faith in order to catechize their kids.”

After trying several different family-centered curriculums, Simmons settled on Pflaum’s
Gospel Weeklies for the takehome materials that parents use. This program bases its lessons on each Sunday’s liturgy, linking the message of the readings with the teachings of the Catechism. The monthly adult formation classes are given by Pastor Sean Connor. While Fr. Connor teaches the parents, parish catechists do activities with the children. The sessions are offered at three different time slots each month to accommodate varying family schedules, and parents may attend them at either of the two partnered churches. Simmons reports positive feedback from parents.

“Those who use this program find it a joy. Only recently two mothers came to me and described how they teach their kids at home once a week, incorporating grace before dinner and evening prayers at the end. Faith is becoming part of their home life, and they were very positive about their experience.”

Acknowledging the reality that some parents do not do their part, Simmons said that focusing too narrowly on 100 percent compliance is the wrong way to look at it. “We forget that all we can do is offer the gifts of faith, hope, and love. In John chapter 6 Jesus offered an invitation and many walked away. If parents look at this as just another thing they must do, then it won’t be a gift, but those that open the gift are receiving great joy and peace beyond all understanding.”

The pastor of St. Lawrence Parish in Brewster, New York, felt that traditional religious ed classes were not helping achieve the goal of producing lifelong disciples — either among students or their families — so he began phasing in a “homegrown” family-centered program in 2015, starting with first grade. When second grade was added in year two, Fr. Richard Gill and Faith Formation coordinator Suzanne Walsh decided to try out the new Family of Faith program from Sophia Institute Press. There were some initial challenges, Walsh recalls. “It was a cultural transition. These parents hadn’t been given such a central role before. Some were excited; some hesitated. But our job was to continually invite and encourage them, remove obstacles, be patient, and affirm them in their role as primary educators.”

After a few months the awkward newness wore off, and Walsh began to see good things
happening: “I observed in our families a growing sense of belonging to their faith community. At first, we’d begin our monthly community gatherings with ice-breaking routines and structured activities. By the end of the year, very little of that was needed — the families were just happy to be together. Another thing: Since Sunday Mass and the program were back-to-back, they were all going to Mass consistently. It’s a lovely thing to see the church filled with young families. In the old days, kids came to weekly classes, but many didn’t come to Mass.”

As mentioned above, the Family of Faith program was being phased in at St. Lawrence one grade level per year. But by the end of the second year, some parents of older children (who were still in the traditional weekly classes) began taking notice. This year, fourth- and fifth-grade families were given the option of joining the first- through third-grade families, and many of them jumped at the opportunity. They wanted whatever it was that made the other families so engaged with their faith and their fellow parishioners.

Moved by the transformation she saw at her parish, Walsh now works for Sophia Institute to promote the Family of Faith program to parishes nationwide. (This year more than 100 parishes are involved.) She gives parish staff advice that could probably apply to any family-centered program: “You know your parish better than anyone and should feel free to make modifications. Different environments lend themselves to different approaches. One parish might already be deeply spiritual and producing vocations among its children. Another might have many families who are just beginning their spiritual journey. There are ways to adapt the program to meet parents where they are. Expect some growing pains, but also know that the results, in the end, will be powerful.”

Daria Sockey is the author of The Everyday Catholic’s Guide to the Liturgy of the Hours (Servant). Visit her blog, Coffee and Canticles, at DariaSockey.blogspot.com.

This article was originally published in Catechist magazine, March 2019 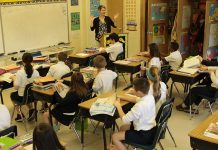 The Sacraments: Things to Get or Encounters to Enter