by The Staff of CATECHIST

This Complete-A-Project Bible Search Activity is for teacher and students (grades 4-6) working together. The exercise can be completed using the Bible to find the words and phrases to fill in the blanks on the next page. Bible Searches for this learning year focus on Gospels from the current liturgical year and feature real-life scenarios in which names and other details have been slightly modified.

* This Gospel (Luke 18:9-14) is the one we hear proclaimed on the 30th Sunday in Ordinary Time this year, October 24. It is Jesus’ parable about the Pharisee and the tax collector praying in the Temple.
* With this parable, Jesus teaches about prayer, humility, sorrow for sins, and reliance on God.
* Pharisees were a religious sect that adhered to a strict observance of the Law and Jewish traditions. Following the law was of utmost importance to a Pharisee. Tax collectors were Jews who served Roman authorities by collecting taxes from Jews for the Roman Empire. A tax collector often collected more taxes than the Roman authorities required, keeping the excess for themselves.
* The Pharisee in the parable shows us our human tendency to be proud of our goodness, to be boastful of our prayer, to compare ourselves to others whom we judge to be less worthy in the eyes of God.
* Although the Pharisee assumes the prideful stance of knowing God’s ways, he still feels it necessary to make his prayer a proclamation to God of his own righteousness—as if God might miss the fact that he’s “not like the rest of humanity,” that he “fasts twice a week,” that he “pays tithes on my whole income,” and that he’s not “like this tax collector.”
* The tax collector offers us an expression of authentic prayer, genuine humility, sorrow for sins, and reliance on God. He is not boastful. He does not assume a prideful stance of knowing God’s ways. He relies completely on God’s mercy.
* The tax collector judges no one. He focuses on his own behavior, stands “off at a distance,” and proclaims sorrow for his sins. He “beats his breast” and asks God to “be merciful.”
* Jesus is very clear about the meaning of this parable: “…everyone who exalts himself will be humbled, and the one who humbles himself will be exalted.”

MATERIAL
* Activity below, one copy for each student
* Copies of the Bible (The Search is based on the New American Bible.)
* Pencils or pens

PROCEDURE
1. Present this activity during the week before the 30th Sunday in Ordinary Time. Prepare before class by reading the Background material above and the entire activity on the following pages.
2. Before beginning the activity, tell students that you would like someone to volunteer to summarize last Sunday’s Gospel (from the 29th Sunday in Ordinary Time, the parable of the judge and the persistent widow; there likely will be few if any hands raised.) Then ask for someone to volunteer to summarize the priest’s homily from last Sunday (again, there likely will be few if any hands raised).
3. Ask students to share anything they can remember about being at Mass last Sunday—anything at all: prayers, music, people they greeted at the sharing of the sign of peace. You are challenging them to think about how well they prayed.
4. Explain to students that the celebration of the Eucharist is our most solemn prayer and that Jesus gives us a story about what our disposition should be whenever we pray.
5. Share the information in Background.
6. Ask for a volunteer to read the set-up on the activity sheet and then work together in small groups to fill in the blanks.
7. Before reading the conclusion to the story, challenge students to guess what Ben and Marsha learn about what Jesus teaches about prayer. Record their responses on newsprint and then review their responses after a volunteer reads the conclusion, especially what Grandpa Pete says.
8. As a final activity, review with students the Blessing Before Meals.

—Guide and activity page by the staff of CATECHIST.
Art by Ansgar Holmberg, CSJ.

“They’re such losers!” Ben chuckled as he shook his head in disbelief.
“Yeah,” his older sister Marsha agreed with a smirk. “It’s like, ‘Oh, we’re so holy. Yep, we’re good buds with God.’”

“What are you talking about?” asked their Grandpa Pete as the three of them walked across the parking lot to the car after Mass.

“Oh, just those two guys who sat in the front pew,” explained Marsha. “They’re brothers and they go to our school and they’re just such losers.”

Grandpa asked the kids why they thought the boys were losers.

“But why’s that?” asked Grandpa Pete.

Marsha sighed. “Oh, Grandpa. Just ’cause. They’re just like…well…like…mean. Bullies. They make fun of people. They say things to people about their clothes and hair and stuff. They think they get to be first in everything ’cause they just think they’re…like…way up there better than everybody,” Marsha explained as she put her nose in the air and acted stuck up.

“And to be so holy-holy, then, by going to church and even sitting in the front pew,” Ben explained further. “They’re just trying to get everyone to look at ’em and think, ‘Oh, nice boys. Look at ’em going to church and praying.’ That makes ’em really big losers—and I’m glad I’m not like them. Never will be.”

Grandpa just grunted with “Oh,” to suggest that he understood. But when they got back to Grandpa Pete’s house, he gave something to Ben and Marsha and told them to read it while he fixed breakfast. Grandpa Pete had given them a Bible opened to one of Jesus’ parables (Luke 18:9-14).

As Grandpa Pete put the fluffy hotcakes and steaming sausage patties on the table for his grandchildren, he could tell by the way they looked at him that they’d learned a lot about prayer.

“Jesus teaches us a lot about prayer, doesn’t he,” Grandpa said gently as he sat down at the table. “Humility, sorrow for sins, not passing judgment, relying on God.” The children said nothing but nodded their heads in agreement.

After a short silence, Grandpa bowed his head, made the Sign of the Cross, and said, “So let us pray right now as we bless our breakfast with the Blessing before Meals.”

This article was written by the Catechist Staff and appeared in Catechist magazine, September 2010. 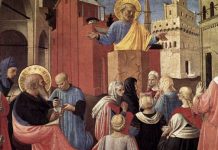 Yes You Can—Teach About the Holy Spirit: One Heart and Soul 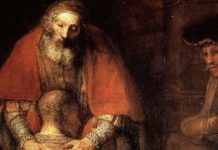 A Parable of Forgiveness