This Complete-A-Project Bible Search Activity is for teacher and students (grades 4-6) working together. The exercise can be completed using the Bible to find the answers. Bible Searches for this learning year focus on Gospels from the current liturgical year and feature episodes in the lives of Sister Vicki and two students in her religious education class, Hugo and Hannah.

* This Gospel story (Luke 4:1-13, for February 21, the First Sunday in Lent) reflects one of Luke’s favorite themes: the importance of prayer in the life of the Christian.
* The action takes place right after Jesus’ Baptism, when the Holy Spirit “descended upon him in bodily form like a dove” (Luke 3:22).
* Jesus’ 40 days in the desert symbolize the 40 years that Moses and the Hebrews wandered in the desert. Jesus is tempted as they were tempted, but he models how to overcome temptation instead of giving in to it as the Hebrews did.
* The first line of this Gospel passage is easy to misinterpret. Luke is not saying that the Holy Spirit led Jesus into the desert specifically to be tempted. Rather, Jesus was led there to pray, that he might grow strong in the Holy Spirit when his time of temptation came.
* Notice the last verse. Luke says that the devil departed from Jesus “for a time”—meaning, for the time being. Throughout his public life, Jesus is tempted again and again to do things the devil wanted him to do in the desert.
* In the first instance, Jesus is tempted to work a miracle for his own comfort and convenience. But he knows that his miraculous powers are meant to be used for only the honor and glory of God. Who would be moved to faith in God by a miracle that nobody saw? In the second instance, Jesus is tempted to seek an earthly kingdom for himself, but he knows he is called to work for only a heavenly kingdom. In the third instance, Jesus is tempted to test God’s fatherly love for him, but he knows that God’s marvelous love can be counted on completely—without any testing—the way small children have total trust in their parents.
* An interesting feature of these temptations is how “good” the devil makes his suggestions sound. What’s wrong with a little “fast food” when you’re hungry? Nothing, really—but Jesus knows not to commit sin to get his daily bread. Misusing his miraculous powers would have been sinful. And what’s wrong with being king of the world if you are already the Son of God? Jesus knows he is to be the servant of all, not the king of all. Kingship would come later—after his death, resurrection, and ascension into heaven. Everything had to happen in God’s good time. Finally, what’s wrong with testing God’s love? It is a sin against hope to test God’s promises of help and salvation.

Answers to Fill-ins: Filled, holy. from, tempted, nothing, him, stone, bread, is, live, showed, the, world, give, power, glory, handed, to, worship, serve, stand, temple, Son, against, Jesus, You, the, God, test, devil

MATERIALS
* Activity sheet below, one copy for each student
* Copies of the Bible (The Search is based on the New American Bible.)
* Pencils or pens

PROCEDURE
1. Read or have volunteers read the set up to the fill-in-the-blank activity.
2. Work together to fill in the blanks for Luke 4:1-13.
3.  Share the information given in Background.
4. Read or have volunteers read the rest of the story. Ask students if they think Hugo will take his cousin’s advice after he prays. Make sure they see that taking someone else’s money without permission, even if it is returned later, is still dishonest.
5. Tell students that the story does continue, simply not on their printed handouts. Here’s the ending: That night Hugo prayed about his problem before going to sleep. The next morning at breakfast, he noticed what a hard time his mother was having getting his younger siblings ready for school. “Mom really needs a break,” he thought. And that’s when it hit him! Later that day, Hugo decorated the edges of an index card with markers to make it look like a fancy coupon. In the middle of the coupon he wrote: “Good for 4 hours of babysitting.” A few days later, when Hugo’s mother pulled the coupon out of a sweetly perfumed envelope, she grinned, gave Hugo a big hug, and told him it was the best gift ever.
6. See if students can find the secret message hidden among the blanks on the activity page. The message answers the question “What special power do you get from God when you pray regularly?” If students look at every third word, they will discover this answer: “From him is the power to stand against the devil.”

Jesus Is Tempted in the Desert

Hugo didn’t know what to do.

His mother’s birthday was coming soon. He wanted to buy her a gift but he didn’t have any money.

“Go around town picking up cans and sell them for recycling,” his friend Hannah suggested.

That wasn’t going to work. Hugo’s mother didn’t like him to wander around town too much. She thought it was dangerous.

“Go shoplift something,” another kid said with a smirk.

Steal? No way, Hugo thought. He absolutely would not do that.

“Slip $5 out of your dad’s wallet,” a cousin said. “Then put it back after you get some money. It’s not really stealing.”

This seemed to Hugo to be the best idea so far, but it still was stealing.

Hugo was thinking about his problem the day Sister Vicki began religion class with a story about Jesus being tempted in the desert. After discussing the story with her students, Sister gave each student a handout for a review of Luke 4:1-13. As Hugo carefully began filling in the blanks, he still felt distracted by his problem.

‘He will command his angels concerning you,
to guard you,’

As Hugo was finishing the handout, a question slowly crept into his mind. How was it that Jesus could think so fast when the devil tempted him? Each and every time the devil spoke, Jesus had a good answer ready. How did he do that? True, he was God. But also he was a human being—and he was being tempted just the way all human beings are tempted.

Suddenly Hugo’s face brightened. Jesus had spent a lot of time in prayer. That’s where he got his strength! Right then and there, Hugo decided that he would pray before deciding what to do about his mother’s birthday present.

“Wasn’t it dumb,” Hugo thought, “that the whole time I was asking for advice from everyone, I didn’t even think about taking my problem to God.” 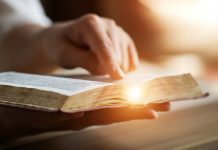