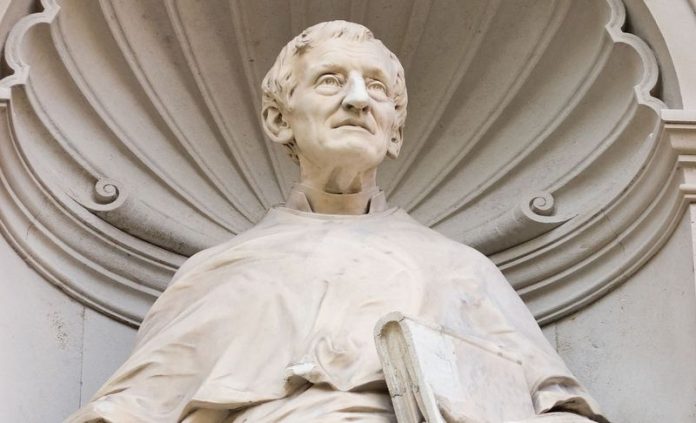 Lessons we can learn from his life and teaching

Although we don’t generally label John Henry Newman as a catechist, his life and works are instructive for catechists today. Newman came of age and confronted issues — materialism, the temptation to replace faith with science, and relativism — that are still with us today. And Newman was not afraid to confront them, being one of the first Catholic intellectuals to offer an alternative to the predominant Enlightenment thinking at the time. Newman’s ideas became the source for many themes of Vatican II, which is why he is often labeled the “father of the Second Vatican Council.”

Newman’s relevance today can hardly be overstated, but many people do not know about this saintly scholar. As he is canonized this month, what can we learn from Cardinal Newman about the nature and art of catechesis?

The encounter with another 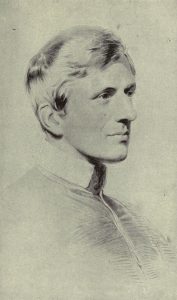 No one comes to the Catholic faith alone. Even those of us who were baptized as babies were brought to the font by our parents. Whenever someone comes to faith, they come — ultimately — because they have had an encounter with the Other — with Christ himself. As Pope Benedict XVI said, this faith “is not the result of an ethical choice or a lofty idea, but the encounter with an event, a person, which gives life a new horizon and a decisive direction” (Deus Caritas Est, 1). It is the goal of catechesis to make that encounter possible.

Cardinal Newman understood well this idea of encounter. Perhaps adopting it from the tutor system during his studies at Oxford, Newman sought to teach his students by accompanying them on the way to knowledge:

You do not come merely to hear a lecture, or to read a book, but you come for that catechetical instruction, which consists in a sort of conversation between your lecturer and you. He tells you a thing, and he asks you to repeat it after him. He questions you, he examines you, he will not let you go till he has proof, not only that you have heard, but that you know. (Idea of a University, Part II, art. 9)

As catechists, we fail if our students have only heard what we are teaching without being led to a true encounter. Newman was gifted at calibrating his lectures to the particular audience and the needs of his students. His flexibility in the manner of instruction allowed him to encounter his students on a deep level, to make sure that the teaching was felt beyond the surface level of understanding propositions.

Newman’s motto was cor ad cor loquitur — “heart speaks to heart.” We can only have a true dialogue with someone when we are face to face, heart to heart, with another person who can understand us. In his Discourses to Mixed Congregations, one essay entitled “Men, Not Angels, the Priests of the Gospel” explains how human beings are the fitting instruments God uses to bring others to him.

[If God employed angels,] they could not have been your patterns and guides, and have led you on from your old selves into a new life, as they can who come from the midst of you, who have been led on themselves as you are to be led, who know well your difficulties, who have had experience, at least of your temptations, who know the strength of the flesh and the wiles of the devil, even though they have baffled them, who are already disposed to take your part, and be indulgent towards you, and can advise you most practically, and warn you most seasonably and prudently.

The witness of our own lives can be powerful examples for our students. We came from their midst, were led in the same way they are led, and certainly know their difficulties. Now we accompany them, direct them, protect them, and love them along the way.

When we encounter God, we encounter truth, which leads us to express our faith. For Newman, such religious expressions are not sentimental expressions but statements of truth and falsity. Newman’s conversion began with an encounter with such a truth. And despite his many years as an Anglican, and even his anti-Rome sentiments earlier in life, Newman was docile to the truth and willing to submit himself to the Church when he found the truth in it. St. Paul VI stated that Newman “recalls to our mind that the search for the truth is an irresistible need of the human spirit and that ‘to discover the truth, it is indispensable to seek it with a great seriousness of purpose’” (L’Osservatore Romano, 4 June 1970, 114).

Part of our role as catechists is not only to lead our students to the truth, but to seek it ourselves, and to put ourselves under the authority of the Church. As St. John Paul II said, Newman “reminds us of the need for an interior disposition of loving obedience to God” (L’Osservatore Romano, 30 April 1990, 1138). That loving obedience to God guided
Newman’s life and eventually brought him home to the Church even in the face of great personal loss — of friends, family, and status in England. “My desire hath been to have Truth for my chiefest friend, and no enemy but error” (The Via Media, London, 1911, vol. 1, pp. xii–xiii). 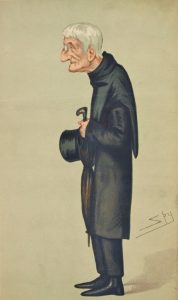 Assent of mind and heart

Yet teaching the truths of the Catholic faith is often not enough. We need, as Newman did, to engage both the mind and the heart. Newman noted the difference between these types of knowledge and related them to two types of “assent”: the “notional” assent of the mind to propositions, and “real” assent to the thing itself. In the context of catechesis, for example, students may have a notional assent that God loves them because they know it intellectually. But they might not have a real assent to it until they have an experience of love — in the sacraments, for instance — such that it becomes tangible to them. This “real” assent engages not just the mind, but the heart.

People might respond to rational arguments, but they often respond more to a witness. Students need to use their reason, but they need to tap into their emotions as well. And the more students know about God, the more they will be able to love him because “we must know concerning God, before we can feel love, fear, hope, or trust towards Him” (An Essay in Aid of a Grammar of Assent (Oxford: Clarendon Press, 1985), p. 83). Newman says emotion can be “the first stirring of grace” in a person and “accompanies” true faith (Parochial and Plain Sermons, “Religious Emotion”).

The point is that we should use every tool we have to bring the faith to others — abstract arguments, emotion, practical experiences — because we do not know what will touch a particular person. In that encounter with another, we use whatever we can to help bring about a real assent and encounter with Christ.

As we celebrate the life and holiness of soon-to-be St. John Henry Newman, we recognize the many and varied ways that God works in us and in our students. Like Newman, may we accompany our students into a real encounter with God, who is truth itself.

Aaron T. Martin, JD, PhL, is an attorney in Phoenix, Arizona. He is an instructor for the Institute for Catholic Theology and the Kino Catechetical Institute in the Diocese of Phoenix.

This article was originally published in Catechist magazine, October 2019